If the graduation parties and concert announcements didn’t tell it was the middle of June this will.  New York’s bass season opens this Saturday. Here are three techniques to try and one minor rule change to know.

Largemouth and Smallmouth Bass are referred to as Black Bass by the NY DEC’s fishing regulations, a little known fact I always found confusing. And while the official season runs the third Saturday in June through November 30, in most counties you can catch and release bass year round, but only using artificial lures outside of those dates.  Just to keep the confusion ball rolling, not all counties allow catch and release in the off season, Jefferson, St. Lawrence, Hamilton, and Franklin are four of the counties not allowing catch and release.

THREE TECHNIQUES AND BAITS TO TRY

The DEC suggests during the early season, begin along the shoreline or inside weed edges and work toward deeper water if you don't have any luck.  Baits to try are stickworms, either wacky-rigged or Texas-rigged, spinnerbaits, chatter baits (vibrating jigs) or top-water lures like a buzz bait or frog. Here's a guide to wacky-rigging.

In deeper water try crankbaits, tube jigs, a Ned-rig or drop-shot rigs. A Ned-rig is a short 3-4” tail section of a stickworm threaded on a jig head. Round jig heads will work but a mushroom style jig head is more commonly used. 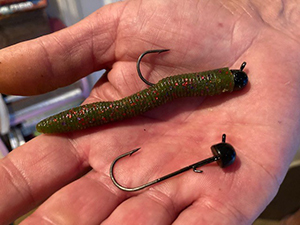 When it comes to live bait, the DEC suggests using a crayfish on the bottom, or a three to four inch minnow fished under a bobber.

ONE MINOR CHANGE TO REGULATIONS

One minor change to bass regulations for the season is minimum size requirements. The state unified the rule to be twelve inches statewide after last year. There were a few waters where ten inches and "any size" were the minimums. Mostly effected by the change are Lake Colby in Franklin County, Moose Pond in Essex County, and Lake Champlain, Catatonk Creek (Tioga County) and Fall Creek (Tompkins County). Five bass is the daily limit. There are a lot of special regulations associated with individual bodies of water and it never hurts to know the rules when fishing in new waters. The DEC's annual Regulations Guide is available on line and at many bait shops.

Source: Three Techniques to Land the Big One, Bass Season Opens this Saturday
Filed Under: cny outdoors, fishing
Categories: This And That
Comments
Leave A Comment
Back To Top